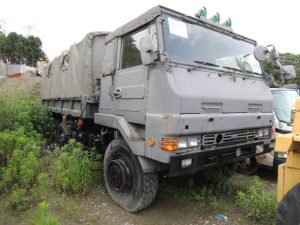 The Isuzu SKW is a tactical truck of Japanese origin. It was developed by Isuzu in the late 1960’s to replace the previous range of 2.5 t trucks in Japanese service. The SKW is best known as the Type 73 in Japanese service. The design has been updated three times in order to provide improved performance. Despite the upgrades the Type 73 designation remains unchanged, mostly because the capabilities and performance remain similar.

The SKW is a 3.5 t tactical truck that is based on a commercial truck chassis. Even though the design was improved in many areas for military use it uses many off the shelf parts. The SKW features a 6×6 chassis with a forward control cab mounted on top of the engine. Most SKW have single rear tires with a few specialist models having double rear tires. On all three models the cab roof can be removed and the wind shield lowered for a reduced silhouette. The SKW series is unarmed and has no armor or NBC system.

The SKW chassis can be fitted with a lot of body types including cargo, dump truck, crane, shelter, tanker and wrecker. The cargo versions may carry 6 t over roads and 3.5 t off road. The tanker versions may carry up to 5.000 liters of fuel or water. It is also used as the launch vehicle for the Tan-SAM missile system.

The all wheel drive system gives the SKW a reasonable cross country performance. Early models had a maximum speed of 90 km/h while late models can achieve 105 km/h. Early models had a 210 or 250 hp V6 diesel engine and manual transmission. The late production models feature a 286 hp V8 diesel and automatic transmission.
The SKW is only used by Japan and has not been exported. It is in use with all branches of the military. Most early models are being replaced by late production models guaranteeing its service life for many years to come.
The SKW 475 is the latest version of the Type 73 truck and was introduced in 1999. The SKW 475 features a totally new cab, a more powerful 286 hp engine and an automatic gearbox. It retains the ability to remove the cab and lower the windshield. The SKW 475 is to replace most previous Type 73 models and is produced in the same variants as the earlier models.