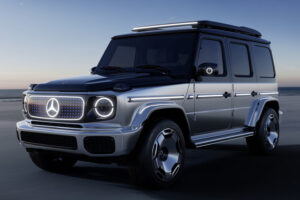 The concept EQG is a model that is said to suggest an EV version of Mercedes-Benz‘s offloader “G class”. The characteristic appearance of the G class is given the same design elements as the Mercedes “EQ” series, and it is said that it is a concept model but close to a commercial model. While inheriting the characteristic elements such as the angular form, round headlights, and blinkers laid out at the edge of the front hood from the G class, the front grille adopts the same black panel type as the “EQS”. Blue dots are laid out around the central three-pointed star. The molding around the body, which is also a characteristic equipment of the G class, is lit up by LED. The spare wheel cover on the back of the body has been changed to a square shape so that charging cables etc. can be stored. Ladder frame chassis and front: independent suspension type, rear: rigid type suspension also follows the G class. The rear axle has been newly developed in line with the motor drive. Details of the powertrain have not been disclosed, but all four motors are mounted near each wheel and each wheel is controlled individually. Together with the adoption of a shiftable two-stage gearbox, it meets the off-road performance required for the “G”.