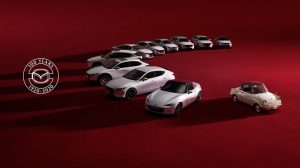 On April 3, 2020, Mazda set “100th anniversary special commemorative car” for all registered passenger cars sold in Japan and started receiving orders for reservations.
This special edition is a model set in commemoration of Mazda’s 100th anniversary, and will be sold for a limited time until the end of March 2021.

Starting from Japan, it will be introduced sequentially globally. It features a red and white coordination based on the two-tone motif of Mazda’s first passenger model “R360 Coupe” that appeared in 1960, and special logos for the 100th anniversary have been placed on the interior and exterior. The main special equipment is as follows.

In addition, various preventive safety devices, power seats, high-end sound systems, etc. are standard equipment depending on the vehicle type. The body color is “Snowflake White Pearl Mica” for all models, and the “Roadster” has a soft top color of “Dark Cherry”.