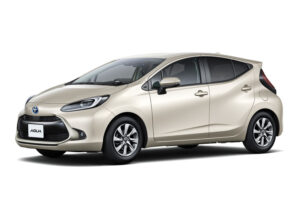 Toyota has released a new hybrid car “Aqua”.
Fuel efficiency has been improved by about 20% compared to the conventional model.
Toyota Motor announced the new “Aqua” hybrid car (HV) on July 19, 2021. On the same day, sales started.

The Toyota Aqua was introduced in 2011 as a compact hybrid-only vehicle that features a large interior space and excellent fuel efficiency. So far, about 1.87 million units have been sold globally (including the North American “Prius c”).
The new model is the second generation model, inheriting and evolving the concept of “compact car looking ahead to the next 10 years” that the first generation advocated, and can be used happily every day as “compact car looking ahead to the next 10 years”. It is said that it is a model that pursues safety, security, comfort, and advanced environmental performance.
The drive system and platform have been renewed from the conventional type, and especially for the former, a bipolar nickel-metal hydride battery is adopted for the battery while following the hybrid system “THS II” that combines a power split mechanism and a motor / generator with a gasoline engine. did. The bipolar nickel-metal hydride battery, which is the world’s first in-vehicle battery for driving, is characterized by high output, and the one installed in the new Aqua has about twice the output of the conventional nickel-metal hydride battery. Realized. It contributes to improved responsiveness to accelerator operation and linear and smooth acceleration from low speeds.
In addition, by expanding the speed range in which it can run only with electricity, it has become possible to run without using an engine in many scenes of everyday use.
On the other hand, the 1.5-liter gasoline engine has also been changed to the “M15A-FXE,” which belongs to a newer generation than the conventional type, which is collectively called the “dynamic force engine.” The hybrid system is also optimized for Aqua.
By adopting these improvements and new technologies, the new Aqua has achieved fuel efficiency of 33.6 to 35.8km / liter (WLTC mode) for front-wheel drive vehicles. At the same time, it is appealing that it also has a light driving like HV.
In addition, when “POWER + mode” is selected in the drive mode, the strength of the regenerative brake is increased, and a new function “pleasure pedal” is adopted to reduce the frequency of stepping on the brake pedal and reduce the burden of driving.
The setting of the 4WD car “E-Four” is also a topic, and the fuel consumption here is announced as 30.0 to 30.1km / liter.
On the other hand, the vehicle frame has been redesigned to a highly rigid TNGA (GA-B) platform, pursuing improved quietness and stable driving.
The body size is total length x total width x total height = 4050 x 1695 x 1485 (1505 for 4WD vehicles), which is higher than the conventional model while maintaining the overall length and width, and combined with the 2600 mm wheelbase that is extended by 50 mm, the rear seats We are trying to expand the living space and luggage space of the car.