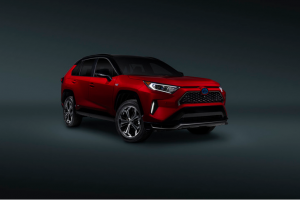 Toyota announced on November 20th, 2019 at the Los Angeles Auto Show in the United States on November 22nd that the SUV “RAV4” plug-in hybrid vehicle (PHV) “RAV4 ​​Prime” will be unveiled for the first time in the world did.
RAV4 Prime is a new model that pursues “Fan to Drive” based on the basic performance of RAV4.

The newly developed plug-in hybrid system is based on the same 2.5 liter straight 4 engine as the existing RAV4 hybrid vehicle, but adopts a large-capacity lithium-ion battery and motor to achieve a maximum output of 302hp (approximately 306PS), which is 83hp higher than the hybrid vehicle. Occurrence. 0-96km / h acceleration time is announced to be 5.8 seconds (7.8 seconds for hybrid vehicles).
EV driving distance is about 62km, fuel efficiency is 90MPGe (about 38.3km / liter. MPGe is a unit that represents how many miles you can drive per gallon by converting the amount of energy consumed by the charged power into gasoline equivalent) . In addition to securing the same indoor space as RAV4 by installing a driving lithium ion battery under the floor, it also contributes to improving running stability by lowering the center of gravity. The 4WD system uses an “E-Four” that drives the rear axle with a motor.

A Lotus Festival
The new paint
Lean About Oil & Fluid For Your Car!!